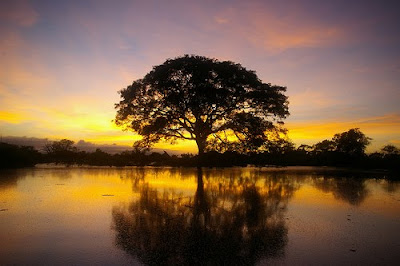 Those are the last three words Christ spoke on the Cross, according to St. John. And, with one exception, that would sound the end of another life by the horrific, tortuous means known as crucifixion.

Here it is, Holy Saturday. The Passion is over and for all we know, Christ still lies dead in a borrowed tomb.

The clouds have moved back in. Daisy dog just finished licking her breakfast bowl and is staring at it as if in an attempt to will more food to appear. Sprocket Cat is snuggled down on the corner of the couch, under that old comforter from a dear friend. The reading light is heating him. The Doctor Who marathon leading up to the new American season premiere is murmuring in the background. Otherwise, the world is muted. Outside, the fresh blossoms on the cherry and the other flowering trees are not so dazzling. There is a Children's song written by one of the FisherFolk called "The Tip-Toe Song." The refrain goes like this:

"And all creation's straining, on tip-toe just to see, the Son of Man come into His own."

So it is now. Its as if all creation is holding its communal breath, straining to hear the Word made Flesh returning in that triumphal moment when the stone is rolled away and the sepulcher found empty. Shimmering Seraphim stand guard, flaming swords at the ready, speaking to the three Marys:

"He is gone. He is not here. Why do you seek the living among the dead?"

That beloved, is the one exception. Christ died, yes. And he rose from the dead after defeating Death itself and all the sin that ever was, is now, and ever will be. He came to reconcile us all to God. He did it through his own death.

Truly we can say, with joy unbounded in our hearts....that yes!