We departed Denver at 11:00 hours on Friday, 4 October 2007 headed East on I-70. The wind was blowing gently out of the South, gusts around 20 mph. Mark set his trip odometer to zero. The Interstate makes a gentle dogleg turn South-East at Byers and heads towards Limon, which sits on the Palmer Divide, a ridge that defines two watersheds. To the North is the Platte River drainage, to the South is the Arkansas River. Limon is about an hour out of Denver. 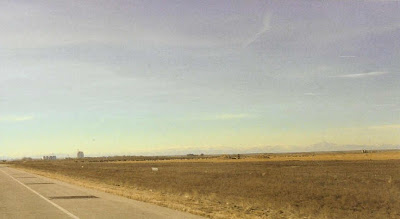 At Limon I-70 turns due East heading to Kansas. Mark took the third exit which put us on combined US Highway 40/287. Once again we were headed South by South-east on a two lane highway.

Hugo, Boyero, Aroya passed behind us. Bladders began to mutter and legs cried about some kind of atrophy. We stopped in Kit Carson...named for a legendary trapper/scout who, in the employ of the Bent and St. Vrain Company, helped to knit the early Colorado/New Mexico settlements into a territorial unit.

The bluffs, mesas and deep folds that define the prairie hard against the Front Range Mountains were behind us. We were now riding the rolling waves of the great, dry inland sea of the High Plains.

Here, the land becomes deceptive to the eye, seemingly flat, it rolls distant in perception and hypnotic to eyes unaccustomed to the immense sky and impossible long sight. Here is an environment perfect for the Pronghorn Antelope, "Speed Goats", "Prairie Ghosts."

At Kit Carson, we logged another hour as we turned east on US 40 towards First view and then Cheyenne Wells. The wind grew in strength. I'm guessing it was steady between 25 and 30 mph with gusts up to 35 mph. 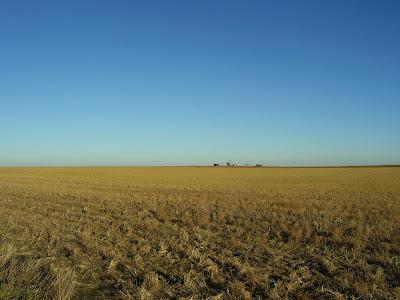 East of Cheyenne Wells, an abandoned homestead in the middle of a
full section (640 acres~ 1 square mile) of land. One quarter was planted in winter wheat,
the above quarter section was left fallow and the remaining half stood dry corn, ready for harvest.

Mark checked his trip odometer. We had traveled 168 miles in a little under 3 hours, not counting the pit stop in Kit Carson.

Cheyenne Wells is the County Seat for Cheyenne County. It is a straight up community of hard working farmers and ranchers, most of whom welcome those hunters who ask permission and treat them and their land with respect. Unlike many of the other small towns which are mournful and threadbare in appearance, lamenting the loss of families and jobs, Cheyenne Wells is bustling, clean and still has that no nonsense, dirt-under-the fingernails, Carhartt overalls, calloused handshake, kick-ass American can do attitude.

Mark and I checked into our motel and headed out into a strengthening wind. Our plan was stop off at the Mockleman ranch to shoot a few rounds to check our firearms, shake off the pre-season willies and then to drive the section roads, searching for the elusive and exasperating Pronghorn.

We packed up the long guns and headed out to scout. The Pronghorn were out there, as expected...dancing on the prairie, feeding in the winter wheat and keeping an eye out for anything unseemly, unusual. The wind was growing stronger. Mark and I decided to call it a day, have a beer or two, eat a bit and prepare for the next morning's hunt. 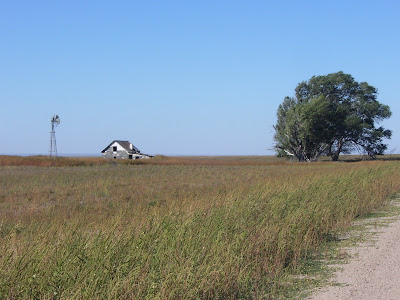 Saturday Morning - At 05:oo, we rolled out of the sack, made coffee, threw on hunting uniforms including the requisite hunter orange and stowed our firearms in the truck while breakfast burritos warmed up. There was a light wind, maybe 15 mph gusts.

The sun cracked the eastern curve of the earth and not one cloud in the sky as we spotted the first group of 12 to 15 antelope about a half-mile away, in the center of a full section of winter wheat. We stopped before the herd spotted us, discussed tactics and decided that we would attempt a flanking maneuver, approaching out of the rising sun.

Mark dropped me off where I could begin a sneak from almost due East, using a large mound of prairie left from some forgotten construction project as cover. He drove to where the road dipped enough to block him and the truck from view.

He gave me a thumbs up and we both began to make our way towards the herd. I headed east by south-east, Mark moved in east by north-east. As we closed in to about 600 yards, we were both stooped over, almost on our hands and knees, ready to crawl the last couple hundred yards.

Then it happened. A satellite buck, one of the younger males who is somehow chosen to be lookout, spotted Mark and trotted up to within 150 yards of him. The buck, stomped a couple of times, then turned and ran back to the herd. Mark, being closer than I, quickly dropped to one knee, picked out a doe standing apart from the rest and squeezed off a shot...which kicked up a cloud of dust right at her feet. 600 yards is a tough adjustment.

It was a melee of hooves and dust and the whole herd took off at a full run, heading north, and we could do nothing but head back the 600 or so yards to the truck. And that's why they call it hunting.

As we turned into the rising sun, the wind grew stronger out of the South. 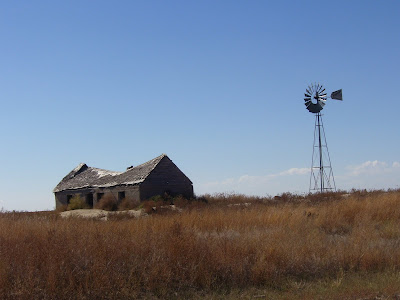 An old adobe house and windmill set on a nominally high rise. A favorite spot for lunch
and a quick climb to glass the surrounding fields for antelope.


That incident set the tone for the rest of the day. Every time we thought that we were almost close enough, one of the herd, or small group, or twosome, would spot us just out of range and they were gone. And we were left with a rising wind and more sand in our eyes, burning our noses and gumming up our rifles. 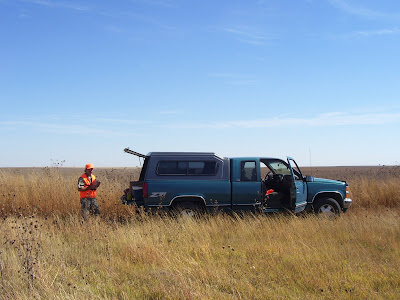 By mid-afternoon, we had driven some hundred plus miles, tried every trick we knew of to put a good sneak on these wily critters and grown more and more exasperated.

And the wind kept rising. Heading due north at 40 to 45mph, the air outside the truck stood seemed to stand still. Driving across the wind was a hoot, and a challenge.
It made scouting interesting, to say the least. 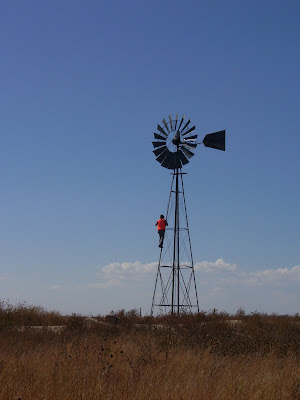 We circled back to the windmill site, Mark clambered up the windmill and spotted what looked to be a small herd about 3 miles away, feeding close to a field of standing corn. That meant cover, that meant he had a chance to actually make an approach which would allow him a shot...in 40-plus mph winds with gusts hitting 50.

I told him I would spot for him, but that I wasn't even going to attempt a shot.

About an hour later, he called me on the walkie-talkie. The stalk had taken him to within about 500 yards and he was attempting to close the gap when another satellite spotted him. The rest is a story already told.

He asked me to drive down the seam between the corn and winter wheat to pick him up. The man was exhausted, frustrated. 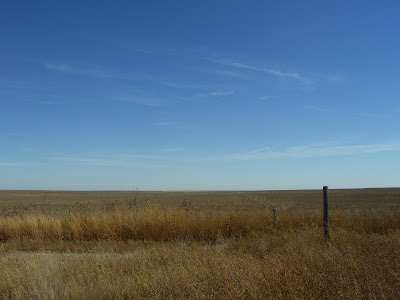 
We headed back to town as the sun settled down in West. The wind was howling, raising dust devils, laughing at all us dehydrated, windburned hunters. Of all the hunting groups with whom we spoke, two antelope had been harvested opening day.

Sunday Morning - We packed up and headed out into a very chilly morning. During the night, a Canadian cold front had moved in. The wind was now out of the North and not quite a bad as Saturday...so far.

We began our search without much hope. In fact, we didn't see any goats at first. It was as though they had packed up and headed for Kansas...or Oklahoma! Our first spotting was a pair, buck and doe who turned tail and ran the minute they saw the truck. The next pair gave us a chance to stop the truck before they sped off.

We came to a crossroads, both literally and figuratively, where neither of us had a clue as what to do. I pulled out a quarter which happened to be imprinted with the Wyoming Cowboy. As a joke I said:

"Well, if its heads, we turn West. If its tails we head for Wyoming." 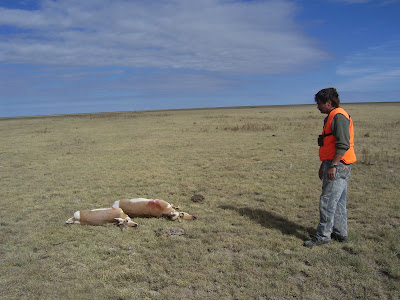 Within fifteen minutes of the coin toss coming up tails, we spotted a group of three goats, a buck and two does. They spotted us about the same time and ran ahead of us and started to cross the road. As we rolled out of the truck, jacking loads into the chambers, the group stopped, seemingly confused by the fence on the north some 300 plus yards away.

Mark took a long shot and missed. The three sped off back from where we had first spotted them. As Mark and I jumped back in the truck to chase after them, the lead doe made her last mistake.

She led the other two back across the road, right in front of us. She crawled under the fence, the other two followed. They then stopped and milled about which gave Mark and I time to exit the truck, set up our shots using fence posts as shooting platforms.

Mark shot first. His doe took one step and dropped. The buck danced about blocking my shot until the first doe hit the ground. He then turned and ran, leaving me with a shot at a quartering away doe, some 200 yards away. I had no time to set and drew down quickly and touched the trigger on the old S&W. It barked, the doe hunched over and stumbled away about ten paces and crumbled into a heap. 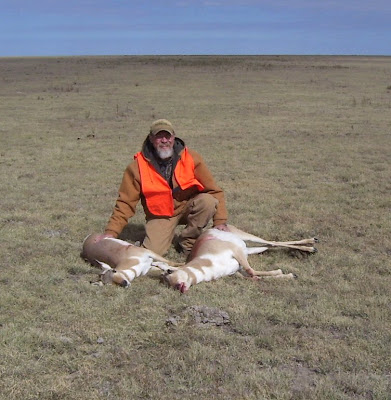 Two Prairie Ghosts, a yearling and an mature dry doe. Meat for the winter!

Mark and I looked at one another in disbelief. Two animals down in less than the time it took for all the synapses to fire off recognizing that it could happen. Two hundred plus yards on each shot and one shot kills on both.
Now the work began. Time to gut, skin and pack out the meat. As we began the process, we did the forensic work on how each animal had died.
Mark's shot had entered at the right side behind the last rib. The 165 grain bullet sliced through the upper lobe of the liver, tore through the left lung and blew through the left shoulder as it exited the beast. The sudden shock would have shut down the yearling's electrical system. In all probability, it was dead before it hit the ground.


The Speer 150 grain Grand slam bullet screamed out of the old S&W.270 rifle, flew 220 paces and blew through the big doe's rib cage directly behind her left scapula. It then ripped through both lungs and mushroomed as it hit her right shoulder. What I thought was a gut shot, given the manner in which she hunched over after the bullet hit her, was a reaction to having both shoulders traumatized and her lungs destroyed. My guess is that the ten or so steps she took were more an autonomic response to flee than a choice to run. Such damage, with a high degree of probability, shut all of her systems down within milliseconds of impact. 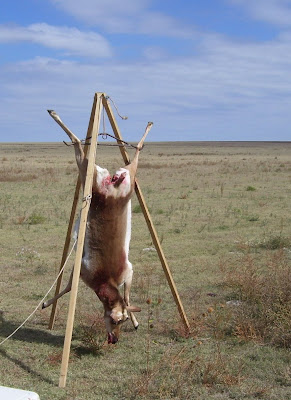 The large doe, gutted, and ready for skinning and rough butcher.
My guess at her live weight is over 110 pounds...truly a big doe.


Mark and I took each gutted animal, hung the carcass and skinned it. We packed them in a large cooler, repacked the truck and headed into town for ice to cool down the sweet meat. Four hours later and, according to the truck's odometer, almost 700 miles logged, we pulled into "Nuevo Los Angeles de los Torres en Colorado", which used to be known as Denver, Colorado."