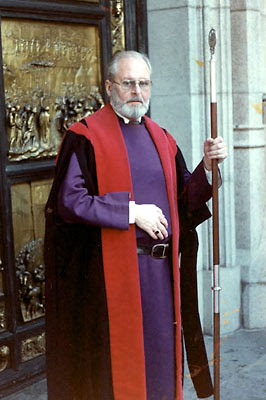 One of the esoteric, and frankly powerful remnants of medieval times in the liturgical worship of the Anglican Communion is the office of verger. Posted above is a photo of one of the best. It is a picture of the legendary Charles Agneau, Head Verger of Grace Cathedral, San Francisco taken not long before his death at age 76.

What is a verger?

David Jette, the retired President of the Verger's Guild of the Episcopal Church spoke to a group of vergers in training: "Basically, a verger is God's butler." The office of verger can be as simple as a ceremonial office to lead processions within the church. Or, it can be as complicated as being the overseeing officer, Sargent-at Arms, instructor and head of all of the subordinate guilds within a cathedral church.

He or she serves the priest or cathedral dean or the bishop, making certain that their needs are met, that the altar guild and acolytes and ushers and choir are all trained and prepared to serve. This allows the ordained ministers to concentrate on their priestly and pastoral duties while the great dance of the liturgy flows around them, supporting them and lifting up their position as God's chosen priests.

Originally, the verger carried a mace to keep unruly and/or drunken congregants, choir members in line and to help remove errant livestock from the sanctuary. He would keep watch over the expensive books and bibles, gold and silver altar adornments. Usually, he was a retired military man, well versed in the art of combat and maintaining order. His mace was not ornamental....it was a weapon.
The contemporary office of Sargent-at-Arms within the US Congress or the British Parliment is the outgrowth of the office of Verger within the Church. 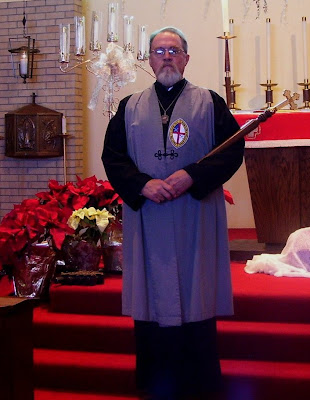 Yours truly, 1st Sunday after Christmas,
Martyrdom of Holy Innocents
I serve as verger in our small congregation at St. James, Wheat Ridge. My post is second in ceremonial and liturgical importance. Only our Rector or priest-in-charge holds more authority. He is ordained and can perform all of the sacraments outlined in the Canon Law of the Anglican Communion. Although I am highly skilled and trained in all of the liturgal nuances and canon law, I am not ordained. Therefore, I cannot perform baptisms, marriages, bless and sanctify Eucharistic elements, sacred oils or holy water.
OH yes!....and what does the latin above mean?
"Service in Worship and Worship through Service." 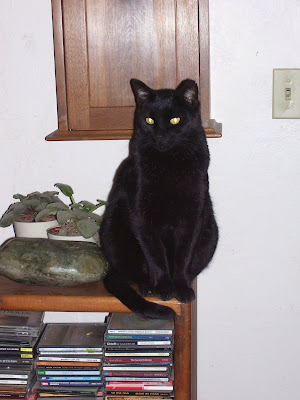 Ten years ago this coming March 26th, a litter of six black kitteh's were born to our dear neighbor's dam. Some nine weeks later, Ms. D was visiting and playing with the all litter mates. As she arose to leave, one little black fluffball followed her and began mewing.

That lil' furball was Sprocket.

He has graced our house, our lives and the neighborhood ever since. He latched on to me early on.

I taught him how to hunt, the joys of feasting on fresh fish and wild birds. He ranges far and wide in the neighborhood, following the "cat highways" know only to the felines who all roam here in the North-West Highlands of Denver. 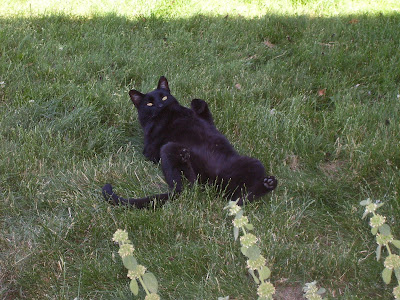 The ornery gato has some scars and we've had some scares when he has come up sick. He has bounced back from each one...until last Thursday. He has not eaten since, nor has he ingested fluids....The Vet has given him fluids by subcutaneous injection.

I've shared much of what has happened to him through the beneficence of that sweet and ornery Headmistress: Sondra @ http://www.sondrak.com/. She is the founder of the Fund which so many of you have made contributions.

I am dumbfounded by this outpouring of support and joyful help!

THANK YOU!
BLESS YOU ALL! 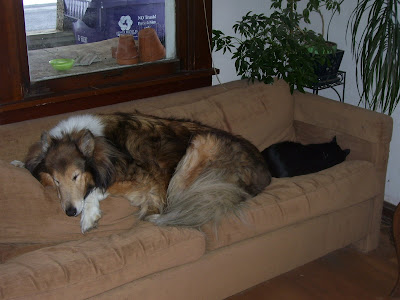 Nathaniel and Sprocket sharing "their" couch.

Sprocket slept almost all night without vomiting. However, when we tried to hydrate him by administering lukewarm water with an eyedropper.....He immediately threw up again. He has not eaten at all. Nothing stays long in his upper GI.

Ms. D is off work until New Years. She will take him back into the Vet's Clinic tomorrow. I simply do not know how much longer the lil' black bugger can keep this up. He is so weak, lethargic.....moving like a Sloth, slow, almost imperceptably slow.

We would not be able to keep this up if it were not for your corporate support, both physical, emotional and fiscal!

THAT, as far as I am concerned, is the true miracle here.