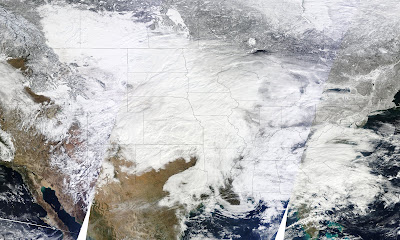 BRUTAL BRUISER
The pic above is from NASA satellite imagery. Thirty states are effected. This is a true killer, brutal, unstoppable and ruthless. "Colder than a _________." (insert your own NSFW old saw here. )

Woke this morning to minus 8 degrees. The old Toyota truck started right up, BUT, it overheated by the time I reached the shop. It seems that the thermostat froze up, or possibly slushed up. The old blue beast was fine later. Topped off the fluids and tested it down to minus 25.

What the static temp doesn't address is the wind chill factor. The ski areas on the Continental Divide were experiencing minus 38 degrees wind chill... and that is the reading at the base at Keystone! Frostbite is the primary concern, followed by hypothermia, and the silent killer; dehydration. At alpine elevations, relative humidity drops to low single digits in this brutal cold. 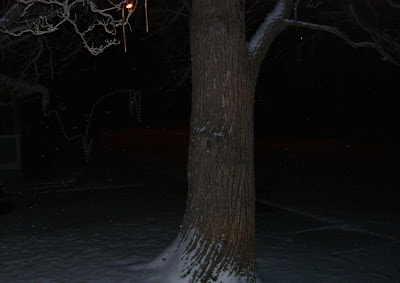 Dark on dark last night as the cold winds blew from Canada. At a mile high, once the clouds blow east, their blanket over the high plains is removed and any ambient heat dissipates into the stratosphere. Brutal cold ensues. Pheasants, pregnant heifers, horses, pronghorn and plains deer will be stressed to the point of death. Critters with dens, fox, wolves, coyotes, badgers and prairie dogs (cough!) will probably make it thru the night. 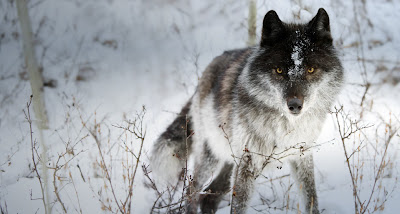 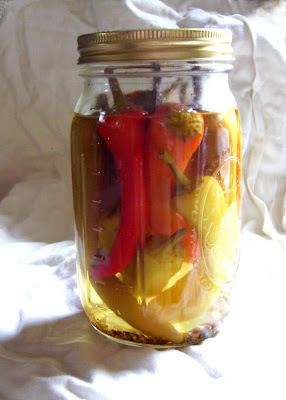 Summer Recollections
Summer's heat captured in vinegar and spices, hot Hungarian Wax Peppers glow in yesterday's sun. It was warm for January, low 50's. Yet steel gray clouds rode the northern horizon, foreboding, foretelling of a Canadian clipper, arctic cold. Today's high temp. marked somewhere close to the lee side of midnight. Now, the arm on the thermometer is creeping down towards the zero mark.

The talking head weather prognosticators are all a'twitter pointing manicured fingers at digital maps where predicted lows are below zero for tonight, predicted highs for January's exit tomorrow might reach zero. Tomorrow night, the old homestead in Wheat Ridge will most likely feel bone cracking 18 below zero. 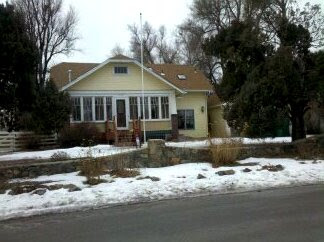 I drive by it on the way to and from the shop. The "For Sale" sign went up about two weeks ago. I've snapped a few pics with the Droid's camera. Its unkempt appearance made more so by the bleak winter skies.

The year was 1956. A not so young couple with three children, a dog and cat and a bushel full of dreams, signed a contract to purchase the house, 2/3 acre lot with 18 apple trees, one cherry tree and a 40 ft. well for $16.5K. That price seemed outrageous at the time. Yet, Dad and Mum wanted that property on the corner as a place for their kids to grow up with a bit of space to stretch young legs. They bought it, knowing that they would struggle to make the payments on Dad's salary as a hospital engineer for the City and County of Denver. There were times when Mom took in laundry and ironing jobs to help keep food on the table. At one point, Dad worked as a night clerk in the local liquor store. Mom and Grandma scoured second hand stores for furniture. Painted Victorian walnut and oak treasures were stripped and refinished in the garage. Their glowing oil finishes fit right in to that old farm house.

In less than 5 years, the plain spoken interior was transformed into a delightful home. We kids had the two bedrooms upstairs. John and I shared the east facing room. Martha had her own room on the north side. On the south, a family room, sewing room caught the southern light.
Mum and Dad had the bedroom downstairs off the kitchen...and, their own bath!

Dad, John and I, spent summer weekends caring for the yard, mowing, weeding, clearing brush and tending the apple trees. Dad had a rose garden out front. Those old roses were his pride and joy. AND, of course, John and I began building a tree house in the huge old elm tree next to the well house.

It was a solid house and a good home.

The original farmhouse was built in 1934, a promise to some family in the depths of the depression. All along what was known as the South Golden road and later, the 32nd Avenue ridge, there were fruit orchards and small farms. Wheat Ridge was an unincorporated township.
Edgewater, to the east, was the closest post office. The fire protection was, and still is, a volunteer enterprise. Jefferson County sheriffs rode mounted patrols along the quiet dirt roads.
Real banks were for the rich folks in Denver. "Banks" out here were the local farm markets and grain elevators, mostly Italian or Dutch men, steel eyed, taciturn and strong willed, with hearts of gold.

So it was when Dad and his little family first landed in Wheat Ridge in 1955. Rudy Gagliano owned "Rudy's Ranch Market," a one story building on the N. W. corner of 44th Avenue and Wadsworth. He sold local produce and canned goods, general foodstuffs and maintained a full butcher shop. Rudy was also the local banker. The closest bank was in Lakewood, a full five miles away. The short little Sicilian took care of the locals.

Dad was one. He had grown up as the son of a merchant, the owner of a General Store in Pickens, South Carolina. He knew the business. He and Rudy struck up a friendship immediately.

This is the story I will always recall:

Dad went to Rudy to cash his first Christmas bonus check from the City and County of Denver. Rudy smiled and beckoned Dad to come back to his office. There, Rudy had laid out a full bar for his loyal customers. He and Dad shared some Canadian rye whiskey and soda, cementing their friendship. That friendship remained until Rudy's health forced him to sell the business. Rudy sold the business to a second generation Japanese family who immediately renamed it "Wheat Ridge Ranch Market" Tom and Rose Sakata were children of the Japanese internment camps in Colorado.

Step back in time with me. Pearl Harbor and War rose bloody red on a December morn.

This is a good time to recall how World War II restructured Denver and her western rural neighbors, Golden, Lakewood, Wheat Ridge and Morrison; to the south, Englewood and Littleton; to the north Arvada and the long reach to Boulder.

When WWII hit home, Remington Arms purchased a huge parcel of land south of of 6th Avenue in Lakewood. They built a massive small arms munitions factory and set up the foundation of the USGS (United States Geological Survey). It was then that struggling farmers and merchants turned their homes and farmsteads into what we now call duplexes. They turned empty chicken coops and loafing and storage shed into housing for workers. The war effort needed them. The farmers and merchants housed and helped to feed these workers, for a price.

The owners of our old homestead raised the roof on the south-west corner, closed off the upper floor and created an apartment, complete with kitchen and an outside stairway. A single family, self-sufficient farm turned into newly suburban style duplex.

America would never be the same! 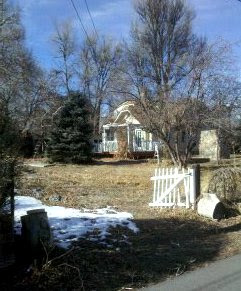 Now the changes come again. What once was a our homestead molders derelict and lifeless. Its strong foundation, clean well and remnants of a small orchard wait. I can only hope and pray that another family with the hope and vision, the basic tools and desire, the capable hands and yearning hearts, will live the history and create another shining light on the hill. This crest on the 32nd Avenue ridge, about half way between Golden and Denver. 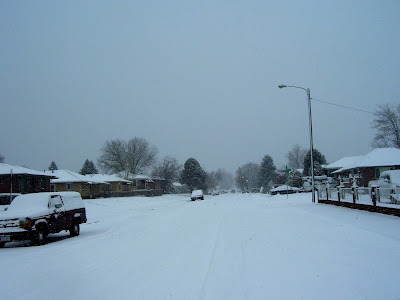 Now, the temperature is creeping down. The bitter, thin wind out of Canada tears at walls and skin, exposed skin and breath. Last I checked, it was barely 7 degrees and still snowing.

I await March as best I can. I await layered in wool and fleece, wine and canned summer on the shelves.


Lordy, how February humbles this fiery old spirit.
Posted by Sven at 8:20 AM 2 comments: