We awoke Saturday morning to wind and heavy, cold fog. Rolling fog, with poor visibility between 50 and 100 yards led us to Nan's Cafe on the Western edge of Cheyenne Wells. Mark and I ordered coffee and big country breakfasts, and watched and waited while the local worthies stopped in to discuss weather and crops.

At 07:00 we headed out into a thick grey morning with bitter wind and fog showing no signs of ending.

An hour later, the fog began to lift. The sky remained overcast, bitter and unfriendly. 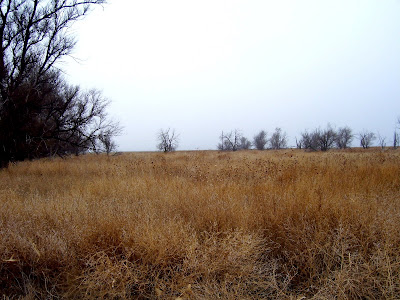 The wind remained low, damp and strong out of the South till about 09:00. It turned quickly out of the West. Within fifteen minutes, the clouds lifted their damp skirts and danced off into Kansas and Oklahoma, a dark shadow on the eastern horizon. 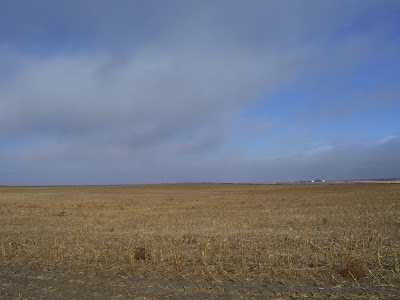 The last of the clouds moving east by south-east.

Mark and I turned North and drove to a favored ravine, running under the highway, West to East. We parked under the overpass. I loaded the .270, slung it on my shoulder and zipped up my coat. Mark pulled out his shotgun, just in case. We both packed water bottles and headed West into the ravine's deep twists and turns. 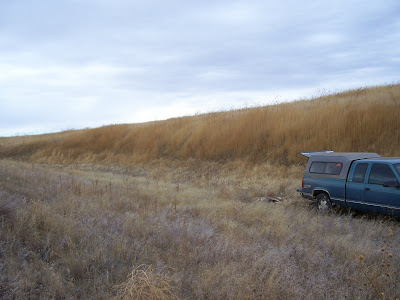 Where the deer bed down and rest, the "honey-hole".
The carcass lies at rear of the truck.

Some five hundred yards in from the highway, the ravine opens up into shelf-like steps where the deer settle in the deep grass after feeding. They bed down out of the wind, relax, ruminate and keep a watchful ear and eye out for predators during the greater part of the day.

We moved up from the ravine floor, quietly and slowly moving along one of the shelves, watching for movement in the tall grass. Mark was 5 yards behind me, about 5 0'clock. I heard him hiss, then a urgent whisper: "Steve, on your right!"

I turned to see a big doe rising out of the tall grass. She bounded to the top of the ravine in two jumps and stopped, turning to look back at us. I slowly dropped to one knee, slipped off the safety and drew the crosshairs right behind her shoulder. She moved more broadside and I adjusted, not thinking of distance. I held center right behind her shoulder and squeezed off a shot.

The big doe dropped like a sack into the grass as three younger does, startled by the shot bounded out their beds and took off at a full run into the West. 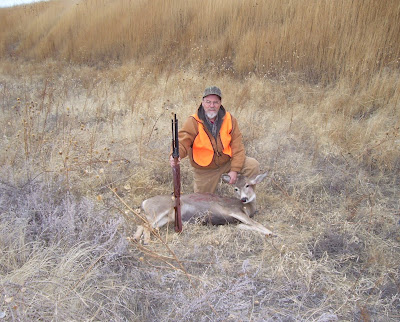 Hunter and harvest, wild meat for the winter.

Mark and I scrambled down into the ravine and headed across and up the South facing slope. At the top of the slope lay the deer, stone dead. Because I had not thought to compensate for distance, my shot had hit high, breeching the top of both lungs and traumatizing her spinal column. Luckily, I held the sights low and dead on.

When I sight in the rifle, I set it almost two inches high at 100 yards because of the "normal" long shots we take out in the wide open prairie. 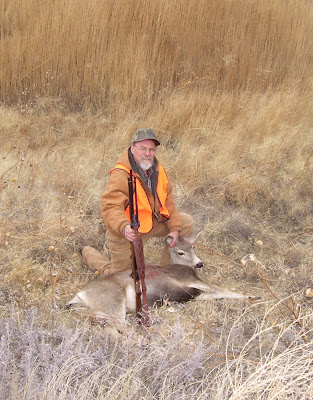 One more pic of man and tool and harvest.
Posted by Sven at 7:15 AM No comments: