(All photos can be enlarged by clickiing on the
image with the cursor.) 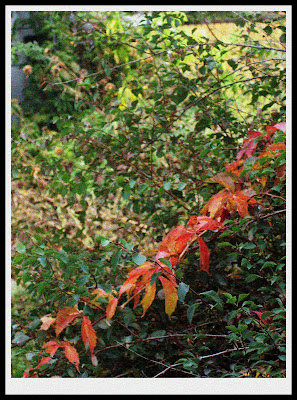 Late summer turns her weary head, early Autumn arrives and the sportsman's thoughts and eyes turn to the sky, the prairies and the woods. When the constellation of Orion, the hunter rises in the evening starscape and wanderlust grows strong in limb and heart, the preparations begin. 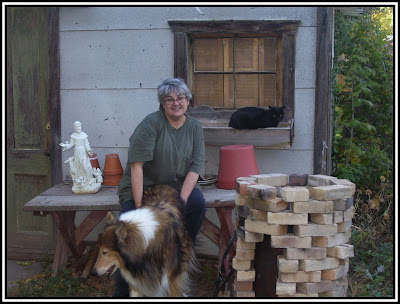 Deborah, Nate and Sprocket outside, next to the smoker.


Outside in the BBQ/smoking/gardening/flyfishing/reloading shed, a transition begins. Garden tools and flyfishing gear are put to the side and hunting tools come out. I take an inventory of reloading supplies and equipment for rifles, pistols and handguns. This year I find that I am low on rifle ammunition for the venerable .270 Win. and out come the scales, powder measure, press and dies, along with the powder, primers, bullets, sized and polished brass casings. 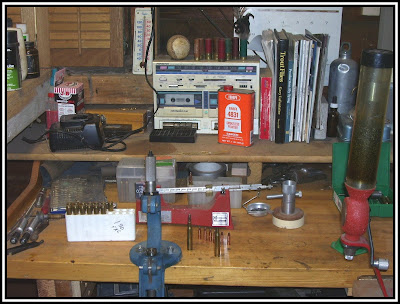 The workbench, set up for rifle/pistol reloading.


When I bought my Smith and Wesson Model "1500" some twenty years ago, it was almost new, neglected, had no scope or recoil pad and a tough, factory trigger. I had the stock cut to match my arm length with an attached recoil pad and mounted a good scope. I purchased different makes and weights of factory ammo and began testing to find what the firearm shot best.


It shot better groups with 150 grain bullets than with 130 grain and it seemed to like the Federal Premium Safari loads over all others... very expensive loads.


After a long discussion with a knowledgable gunsmith friend, I bought a set of dies and an assortment of different styles and weights of bullets. I began experimenting. Long story short, the following is the recipe that has proven itself to be the best, most accurate in this particular long gun: 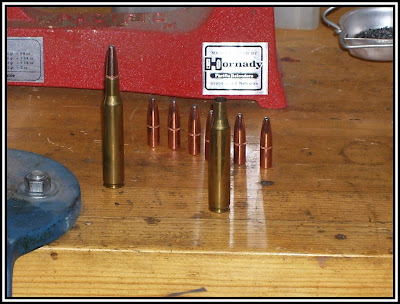 
When well practiced, I consistently shoot 2 to 3 inch groups at 200 yards from a bench. Although I have not chronographed this load, it supposedly leaves the barrel traveling at nearly 2,900 fps and carries enough energy to knock down a deer or antelope at over 3oo yards.

I had the stock cut and a Decelerator recoil pad installed bringing the LOP to 14 5/8 inches.

The original trigger was sticky and required about 6/7 pounds of pressure to touch off a round.

My Lakewood LEO gunsmith friend removed the trigger group and performed some of his magic. The trigger now breaks crisply at about 3 pounds of pull.

The bipod is invaluable as a shooting platform for hunting out in the empty prairie. The scope is a variable 3/9 power Weaver set at one inch high at one hundred yards, at 6X power, effectively making zero at 200 yards. 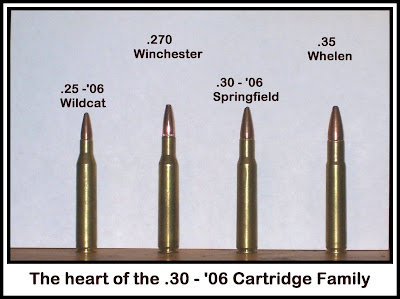 The .270 Winchester was developed in the early 1920's and came into production in 1925 by Winchester Repeating Arms Company. It was the first of many "wildcat" cartridges based upon the venerable .30-'06 Springfield cartridge and still well liked by American hunters. It's populariuty is eclipsed only by its parent cartridge, the .30-'06.