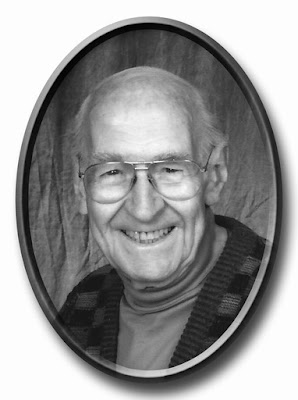 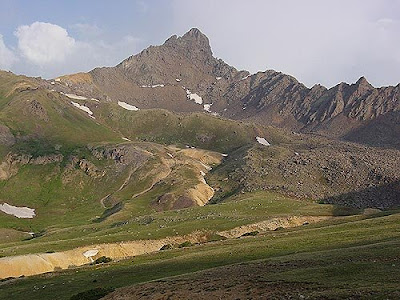 The Echoes of a Man Remain Long After His Passing

Wetterhorn Peak, as pictured above, is a quintessential Colorado fourteener...that being one of fifty some-odd peaks which rise over fourteen thousand feet in altitude. That would translate into nominally two and two-thirds miles above sea-level for those of you educated in the public schools or those of you living in Rio Linda.
It is not an easy climb. At that altitude, it is said: "There are only two seasons up here, Winter and August." The air is thin, little oxygen content and prevailing westerly winds blow unceasing. The ascent begins with a two hour hike from approximately where the photo was taken to the final approach. The easiest route leads up to the left hand facing ridge where, at about thirteen thousand feet, the climber heads almost straight up towards the small needle's eye you can see at the base of the Shark tooth peak. Three hours up and three hours down, if afternoon thunderstorms don't drive the climber off the final approach.
Although, Dad Lundquist and his roughneck, pre-teen buddies would have found a way to climb to the top with their suspect climbing gear...The story follows below:
~~~~~~~
The last time I sat and talked in private with my biological father, Wallace Lundquist, his straight and tall six foot-one, John Wayne kinda' frame had been twisted, compacted by a Staphylococcus infection that twisted his spine. Add the weight of eighty plus years living, working and loving on this broken ol' earth and he ended up at about five foot-eight inches in height.
His old eyes, still bright and strong, rose to look out the window of the small, assisted living apartment that he shared with Than, his beloved wife of 56 years. That window gave Wally a full view of his favorite Colorado Massif....Pike's Peak. A broad smile rose and lit up the room. It was obvious to me that a memory, strong and bright was breaking free, yearning to be shared. He struggled to speak, his once strong Marine D.I.'s voice, ravaged by age and a compromised cardio-pulmonary function.
His eyes misted over as he recalled his boyhood. Dad told me of a summer in his early teens when he and his friends would "borrow" their mother's woven clothes line ropes, wrap them around their torsos, mimiking what they hadl seen at last Saturday's matinee...the flickering newsreel that spoke of the newly formed and infamous "10th Mountain Division."
He and his buds wrapped their clothesline "mountaineer's ropes" tight, hopped on their Schwinn single speed cruisers with flour sack bags stuffed with sandwiches and jugs of Kool-Aid and headed west.
Dad's home was located in the heart of Denver's Capitol Hill Neighborhood at 1554 Emerson Street. His third floor bedroom faced west, toward the mountains. On a clear, bright summer morning he could see the full Front Range, from Longs Peak up north, all the way down to Pikes Peak rising above Colorado Springs.
The boys rode west on Colfax Avenue, one of the longest, contiguous Main Streets in the American West.
They pedaled down from Capitol Hill into the Platte River Valley, filled with the stench of industy. Mine and mill, rail and rock, water and sewage. That is where the Poles, the Irish and the Italians worked. The boy's legs and lungs began to burn as they climbed up into the Barnum neighborhood. If it were Saturday, all commerce was silent for this was the heart of the Judiasm in Denver. The synagogues overflowed with songs of praise that poured out onto the asphalt running west, growing warm in the morning sun.
When they reached Sheridan Boulevard, Denver ceased to be. The boys' eyes ran gun sight straight into the proto-suburb of Lakewood, then into the farms and ranches pushed up against the rising waves of foothils where Colorado's first Capitol, Golden, sat grinning in the sun, nestled in the uplifted old ocean floor of broken sedamentary rock. They could barely see their goal, the dusty, brick colored formations called Red Rocks. When they finally arrived, Dad Lundquist and his young roughnecks would climb the rock formations, eat their lunch and then rappel down, using the clothslines!
Mid-summer mornings in Denver and her suburbs are created for children. The air is cool and full of life. It is a vibrant mix, heavy with the smells of farm and ranch lands stretching east across the high plains, and sharp, bright and cold as soft winds wander their way down from the montane heights through the canyons. Some folks have remarked that a soul would be hard pressed to need any other food to exist. And that is what I saw in my father's ancient eyes as he recalled his youth in this old Queen City of the Plains, Denver.
Now he is gone. Yet the echoes of his life continue to resonate in all the lives that he touched here on this broken'ol world. I know that to be a fact.