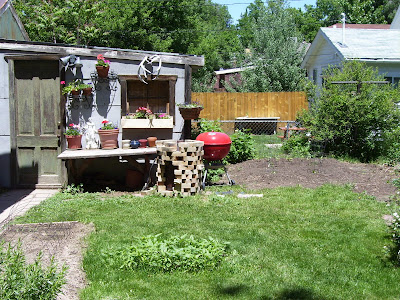 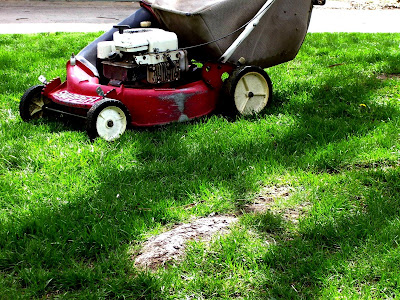 I was having a talk with my lawnmower yesterday. Yeah I know. That sounds like some libtard, wing-nut, moon bat thing to do. But you must understand. The lawnmower has been with me longer than my wife! Oh, its a keeper and still starts and runs, doing its job without complaint.
That, and I can talk to it without having to explain or wonder if I have hurt its feelings.
You see beloved it all began like this:
The headmistress over at the KisP institute for Politically Incorrect Cultural Studies:
(http://www.sondrak.com/)
did a little write up on her garden, with photos. Not that she included those photos of her working, as she put it: "In my bathing suit :) " And, that is what prompted the little dialogue with the lawn mower.
This Spring, short work hours finally whittled down to nothing. Full unemployment followed close behind. You want a metaphor?
OK.....Here'tis:
A 14 year old bag of testosterone hanging hot on the tail of a yeasty young blonde thing in tight capris and budding breasts bustin' out of her tank top. That is a train wreck looking for a place to happen.
After all, it is Springtime !
I have way too much free time on my hands. That is both good and bad. The good is that I have time to walk the creekside paths, work in the garden and take photos and ruminate and cogitate and write endless rants on the state of the world.
The bad part?...I still have way too much free time on my hands!
For the first time in at least four years, I have planted a full garden. Its not just a couple of tomato plants and maybe a cucumber stuck in the ground. No sir. For over twenty years, I have been using a modification of "Square Foot Gardening":
http://www.amazon.com/gp/product/B000LBMLTG/sr=1-5/qid=1243629277/ref=olp_product_details?ie=UTF8&me=&qid=1243629277&sr=1-5&seller= 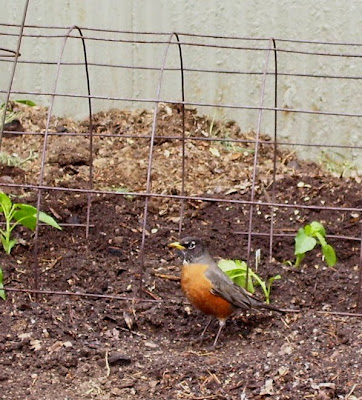 Its based on laying out and planting in blocks of one square foot, using French intensive gardening techniques which allow for multiple plantings in one season. All of the beds are raised and double dug. I've been composting for 12 years adding all the organic kitchen waste, egg shells and coffee grounds and tea bags, plus fresh horse apples to warm it up a bit. The birds love it . I encourage good bugs and earthworms, no insecticides. If it sounds a bit Hippie-Dippie.....you would be right on, man! Long live the Whole Earth Catalog! 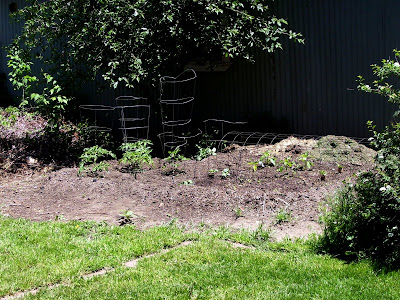 Here is the basic layout:
(1) Next to the reloading shed:
- Volunteer raspberries which some bird deposited as a fecal offering some five years ago.
- A row of Russian Giant Sunflowers on the north end of four large blocks containing
- a hill of butternut squash
- a hill of acorn squash
- two hills of jack-o-lantern pumpkins.

There is also an interesting volunteer coming up on the edge of the compost heap. I can't quite tell what it is...So, I'll let it be and either pull it or help it along once it identifies itself. Umm, and there are always some volunteer parsley and cilantro that pops up unannounced. 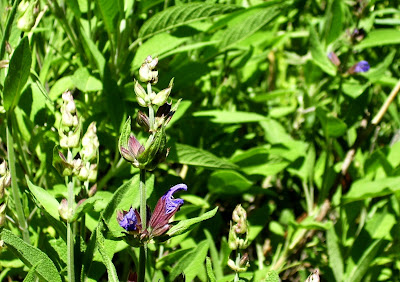 The whole jumble is watched over by St. Francis standing amidst flowering containers: 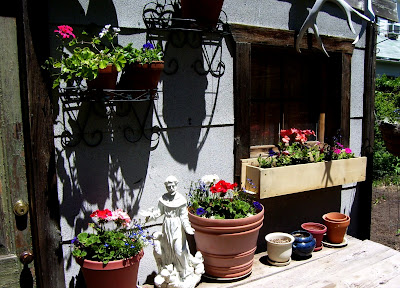 Once some of the summer crops are all harvested, I will plant cool weather, autumn harvest crops: leeks, Spanish radishes, snow peas and more spinach. Those will last into October with a little TLC.

Oh yes, there will be contiued reports and more photos as the summer progresses.