- Setting up the "Cabin", a 20ft. hunting/fishing trailer.


On Thursday, 5 July, 2007 Mark and I headed out of the 90 plus degree Denver heat. Mark is one of my oldest friends, a stout man and an ethical hunter and fisherman. Just before sunrise, we loaded his truck with flyfishing gear, food for a week, adult beverages and my .357 S&W "Black Bear Repellent"pistol. We left Mark's house at 06:00. Two hours later, we arrived at his land in South Park.

Mark purchased his two parcels of land, a total of 5 acres, about eight years ago. The land sits on a wide ridge top which, more or less, runs east to west. His parcels set on the North facing slope. The year after the purchase, he bought an older, twenty foot travel trailer and placed it on a leveled flat facing almost due West.


It is simple, almost rustic. There is no inside toilet and the water system no longer functions. The convenant controlled land association provides a "public" outhouse for the use of the recreational landowners, like Mark. There is a year round spring at the base of the ridge which provides clean, cold water at some five gallons a minute. Mark carries four, two and a half gallon water jugs which are filled at the spring used as a water source at the "Cabin." The only truly modern convenience to which Mark has aquiesed, is the installation of a small electrical generator. It provides light and allows the heater to be run on cold autumn nights. 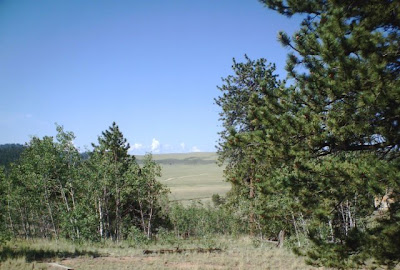 - View from the "Cabin" facing West by Northwest, across Buffalo Valley.


Mark's land is located near the center of South Park, just North of the legendary fishing reservoirs of Antero, Spinney and Eleven-Mile, impoundments which breech the main channel of the South Platte River.

South Park is a huge glacial valley encircled by great mountain ranges on three sides; East, West and North. All of these ranges dump their valley facing snow-melt into the South Platte, making it a grand and powerful river before it exits the valley through Eleven-Mile Canyon, turning Northeast towards Denver.

The South Fork, Middle Fork, Tarryall, Jefferson, Michgan are main tributaries which feed into the central river at various points in the valley.

In most years, it is a lush and fertile valley. Still, there are the years when snowpack is low and the summer rains are driven North or South, or are simply non-existant. Those years are reminders to us all that Colorado is mostly a semi-arid desert.

The following pics were taken on the Middle Fork within the Tomahawk State Wildlife lease. Mark and I fished this beautiful, glacial valley for three days. 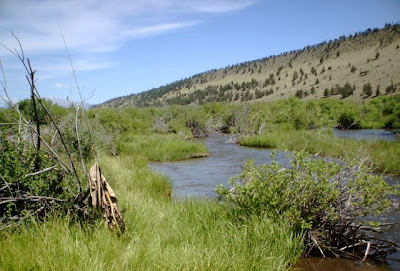 - Gear at the ready, streamside.

I fished my favorite set up:

The first day we threw every fly in our arsenal at the water. Dries, Wets, Nymphs...specific imitations and attractors of every size and color were tied on and cast in every possible style. I had only three strikes and one hook up in three hours.

Mark did about the same. Neither of us brought a fish to hand, much less to the frying pan. It was a frustrating, yet gorgeous and restful day. 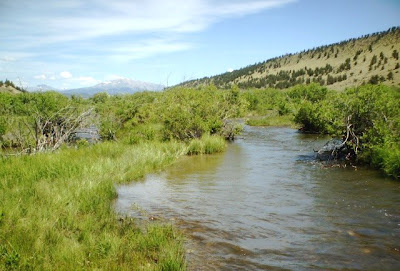 - The Middle Fork, facing north to its headwaters.

Where we fish, the Middle Fork runs cold (never over forty degrees,) even in the middle of Summer. The Tomahawk State Wildlife lease is only forty-some odd miles downstream from its headwaters at the base of Mount Democrat (14,148 ft.). It becomes quite a formidable river in those forty miles, carrying snow melt down from five of Colorado's fifty-one (or fifty-two, depending on who you believe) peaks reaching over forteen thousand feet in altitude.

The Middle Fork, like the main river and all of its tributaries in South Park, is rich with native species of aquatic insects. There are multiple, overlapping hatches of major insect groups during the seasons when the waters are open. The Caddis (Trichoptera) was the hatch that Mark and I hoped to be lucky enough to catch. Six years ago we experienced the full Caddis hatch. The two of us spent two days catching and releasing at least twenty-five fish of nine inches or better during each day. We were sore, sunburned and smiling from ear to ear for weeks after. 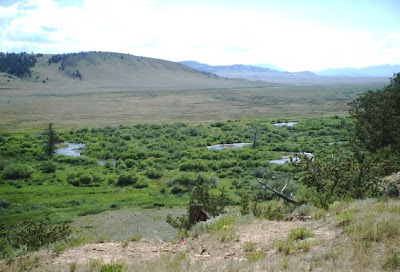 - The Middle Fork athe mouth of the the glacial valley, facing South.

The drainages of all Colorado streams and rivers are formed by one of two geological phenomenon; glacial activity or water errosion. The Middle Fork, as is moves through the Tomahawk State Wildlife lease, twists and turns, creating oxbows in a gentle "U" shaped glacial valley. Over thousands of years, the river has carried silt, rock and rubble down during the wild Spring run-off and depositing it in this valley. The ox-bows which twist and turn, sometimes turning into woven side channels, allow the run-off to slow, and the deposits fill the channels creating pools and estuaries which eventually fill with the silt creating peatbogs, and rich soil and finally, this rich subalpine hay and grazing land we call South Park. 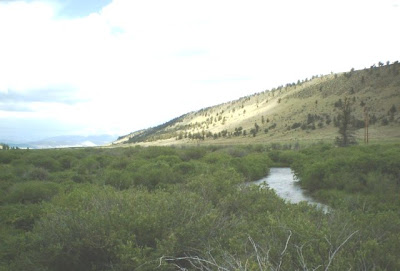 The willow and the beaver helped create the riparian envrionment of the Middle Fork, just as they have done for all the rivers in the Central Rocky Mountains. Since the arrival of European man in the early 19th Century, the beaver are no longer a major influence. However, the willows remain. And since there are few beaver to harvest them, they can become thick, entangled forests, prohibiting access to the rivers. European man has introduced their cattle, which can, under their watchful eye of the rancher, create breaks opening flats and access to the rivers.

Cattle do not, however, build dams. It is up to man to either reintroduce the beaver or replicate his work if the historic nature of these amazing watersheds. 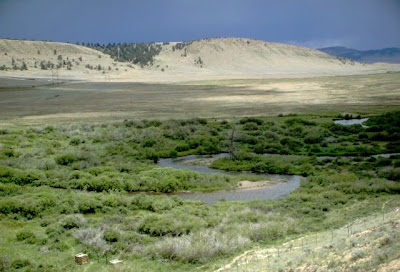 Mark and I fished that first day until about 13:00 hours when the storm clouds, thunderheads and winds drove us from the river. Cold rain pelted us as we reached the truck. The Mourning and Eurasian doves poured into the Ponderosa as we stripped off waders and boots and vests and jumped into the cab. Cloud to cloud and ground to cloud lightning struck all about us as we drove over the alluvial ridge down into the main channel valley south of Hartsel. Mark asked me if I wanted to check out the legendary "Dream Stream" that stretch of water between Spinney and Eleven-Mile. It is mostly public water and being the tailwater of a dam, open to fishing year'round.

The "Dream Stream" http://www.coloradotrouthunters.com/dreamstream.html , (the only hotlink in this little essay), is an amazing yet exasperating.... beautiful, glorious and very technical; or ugly, nasty, wind driven and completely unfishable five mile stretch of the main channel of the South Platte River.

The storm proceeded us. Driving wind blew the rain, rattled the truck and created an amusement park ride for us as we hauled our way across South Park. It was clear, or not so, that the "Dream Stream" was in one of her nasty and unfishable moods.

We headed back to the "Cabin" to dry out, share libations and lies, food and a short poker game. We each turned in to sleep a night of sleep in the rain-washed, Aspen spiced air of South Park.

At some late point, I woke to answer Nature's call, stepped outside to find a sky filled with dripping bright stars. The storm clouds were gone. I relieved my bladder, and bearing a grand smile, returned to dream of rivers filled with monster trout and endless plains filled with elk and antelope. 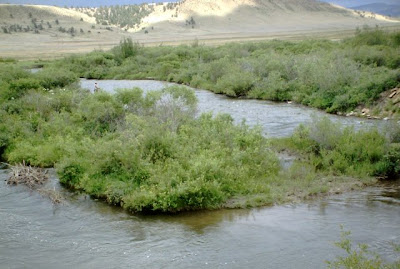 - A transitional ox-bow on the Middle Fork. (Mark is a tiny figure on the upper left
hand stretch.)

Day Two:
Mark and I returned to the Middle Fork on the Tomahawk State Wildlife lease. We spent the early morning drive discussing what had worked for us, at least to a minor extent, on the previous day. Mark tied on a #14 pheasant tail nymph with a strike indicator. I began with a #14, Blonde St. Vrain Caddis dry fly. We hiked down, heading North into the interwoven channels.

Mark headed upstream, I headed down. It was, after all, a "fishing" trip...not a "catching" trip. 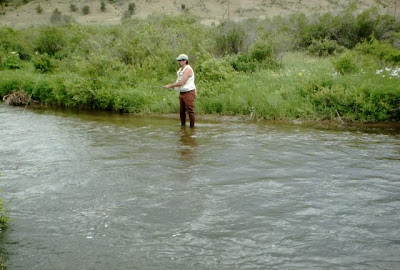 
An hour or so later, I walked upstream to find Mark.

Neither of us had caught anything.

I told him I was going to try a dry fly which had drawn one good strike early yesterday. I tied on what I could only describe as a strange and abberant mutation of an Olive Stimuator. It had a bright, lime green thorax and the rest of the body looked like a traditional Stimulator. (NO....not that kind of stimulator!!!) I walked back to a promising hole, tied the #12 monster on the line and flipped it over a ragged snag into the flow above the deep hole.

Faster than thought, a black shape flashed up from the deep, hit the fly and I raised my rod tip.

The fight was on. The fish dove, bending the light tip of my rod to the water...It had to be a Brown trout, heavy and thrashing... Less than two minutes later, a tired and gasping eleven inch Brown lay in the grass bank and I stood, smiling ear to ear. 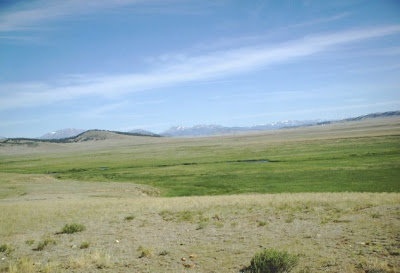 - The dark line of the Middle Fork as it flows out to meet the main channel in South Park.

I told Mark what had happened as I handed him a clone of the mutant Stimulator.

As he re-rigged his line, I returned downstream. For the rest of the day, we worked the deep holes, riffles and snags all along the Middle Fork in the Tomahawk State Wildlife lease. Between the two of us, we caught and released twelve or so fish of notable size and a number of fingerlings.

Those fingerlings defined the future of this watershed. The Colorado Division of Wildlife no longer stocks what are called "put'n'take" clones in rivers. They stock the major lakes, ponds and reservoirs with what they call "catchable" size trout, seven to ten inches. They also monitor and maintain sub-alpine and alpine lakes with remnant spawn of native cutthroats.

Mark took two fish home for his daughter. I took none.

We fished a bit more, then returned to the "Cabin" for celebratory drinks and dinner. We woke more later than early the next morning, ate breakfast, closed up the trailer and headed down to the valley floor.

We stopped here and there, visited old friends, talked of the passing of parents and friends taken too young, too soon. At some point near mid-day, we turned our heavy hearts homeward, eastward, back to the heat of the high plains and this new Los Angeles, the megalopolis of Denver.