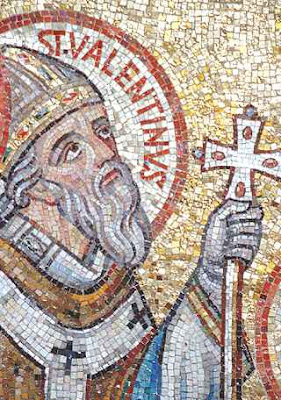 Happy VD!
~~~~~*~~~~~
It is impossible for me to treat this holiday with anything but tongue in cheek humor.

Historically, little is known of him or who he truly might have been. His name might have been "Valens" - the latin for "something of worth" and one of many early bishops martyred in the 3rd or 4th Century by the vestiges of a failing Roman Empire. 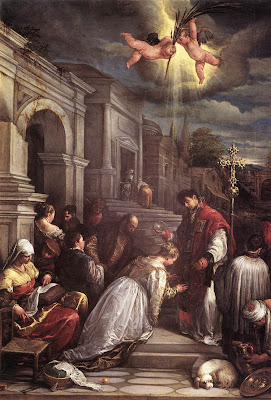 "...the Catholic Church's official list of recognized saints, the Roman Martyrology lists seven: a martyr (Roman priest or Terni bishop?) buried on the Via Flaminia (February 14); a priest from Viterbo (November 3); a bishop from Raetia who died in about 450 (January 7); a fifth-century priest and hermit (July 4); a Spanish hermit who died in about 715 (October 25); Valentine Berrio Ochoa, martyred in 1861 (November 24); and Valentine Jaunzarás Gómez, martyred in 1936 (September 18)." -Wikipedia


The martyrdom of anyone for the sake of Christ's Church is not to be taken lightly. However, that is what has been done to the memory of Valentine. Our culture has turned the remembrance and celebration of an early church Father into a schmaltzy and vapid day to "celebrate" carnal love.

There are better icons which could be raised and venerated....objects of desire, with attributes considered physically beautiful. Norma Jean is probably the best known from the last century: 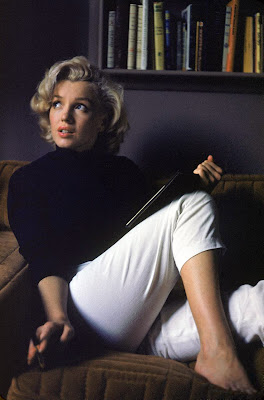 And yes, she is/was a delightfully sensous physical being and highly intelligent! There is no denying that fact. Sadly, she martyred herself to the Hollywood cause...a gentle and sensitive spirit ravaged by false dreams, and run to ground by the slavish, insatiable hounds of Media Hell.

Then there are those who look at life through decidely off-the-wall attitude towards love and take that attitude to the grave....with a sense of humor!!!!! 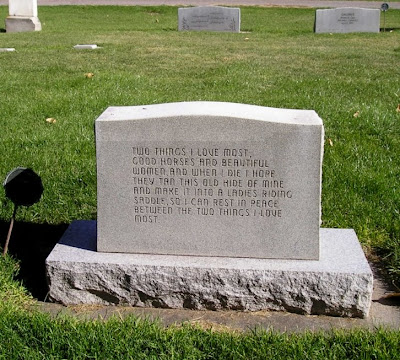 So...to all my friends who visit and any others who might stumble onto this humble Blog....Here's wishing a blessed and truly love (agape, filial, eros and koinonia) filled St. Valentines Day!!! 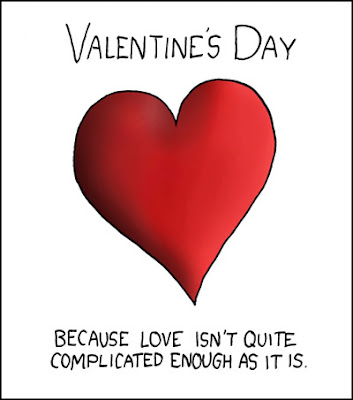 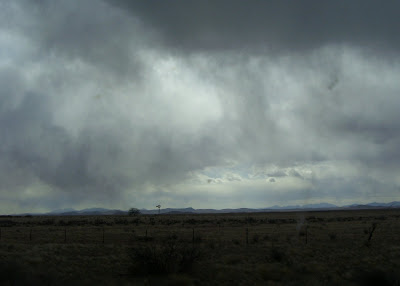 We drove into Socorro near sunset in blustery, unsettled weather. It had been a long day's drive from Green Valley, AZ following Interstate 10 east across to the Hatch turnoff, then north on Interstate 25. 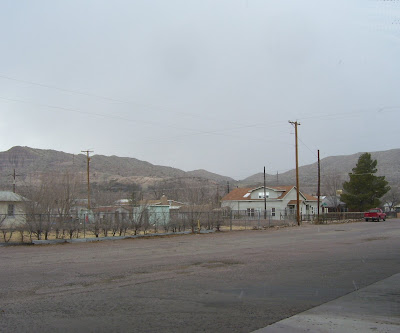 Interstate -25 runs through central and southern New Mexico following the line of the Rio Grande from just south of Santa Fe all the way to the border in El Paso Texas.

Most of the drive is delightful, filled with pastoral scenery or stunning mountain vistas. However, the section of freeway between Albuquerque and Santa Fe can be painfully slow during rush hour. We realized when we packed up the next morning that we would enter Alburquerque at the height of the morning rushhour...No thanks: 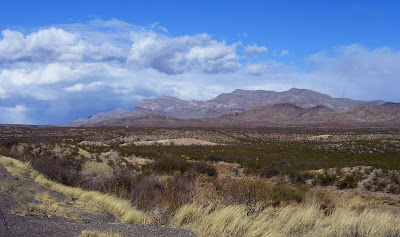 A quick look at the Road Atlas gave us an alternate route on two lane highways, bypassing the metroplex that has become Santa Re/ Albuquerque. We exited I-25 at Bernardo and headed east on U.S. 60. Just as we crossed the Rio Grande, a huge flock of blackbirds poured across the sky in the sunrise: 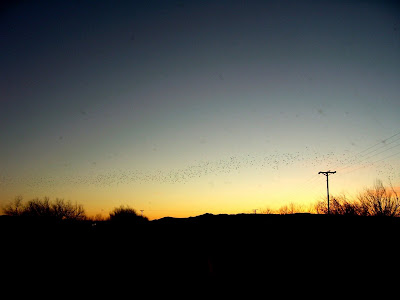 Highway 60 from the river to the foothills is one of those infamous "gunbarrel" straight two lanes that run across so much of the desert Southwest. The photograph in the blog title was taken looking back westward towards I-25 about 12 miles from the turn off. The mountain massif in the back ground is Ladron Peak (9,176ft), one of the many oddball geological singularity uplifts that dot southern New Mexico and Arizona. Looking north we saw the tail end of Los Pinos Moutain range. The highway would take us through the foothill to the eastern edge, through Mountainair and the turnoff north onto State Highway 41: 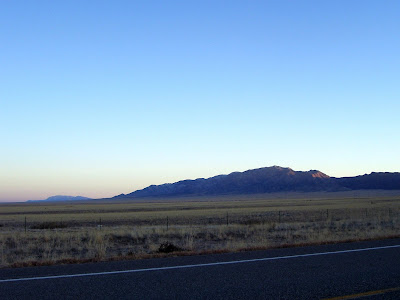 To the south we watched as the sun washed across the the aptly named White Face Mountains. Scattered herds of white face Herefords and Angus cattle grazed in the bitter cold morning: 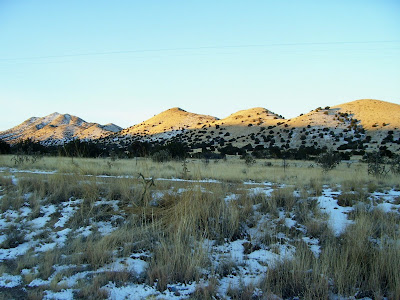 Sometime near mid-morning, we crossed Interstate 40 at Moriarty and said a quick hello to the infamous old Route 66. The next stop was to stretch our legs and take a couple of pics in the quintessential little town of Galisteo. Its one claim to fame is its long row of garish, brilliantly painted mail boxes all lined up across the street from the Catholic church: 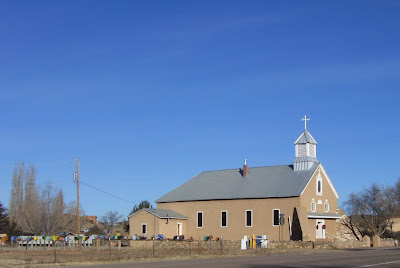 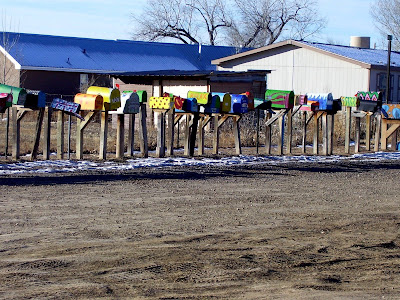 From Galisteo, it is a short drive north to Lamy, where the two lane meets up with Interstate 25 just outside of Santa Fe. I wish that we would have had more time to explore the two lane roads all the way back to Denver.

"Caleb" is a comfortable and dependable road car, easy to drive and easy on fuel: 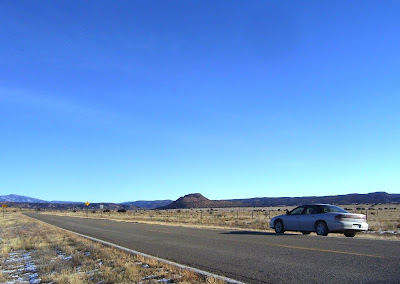 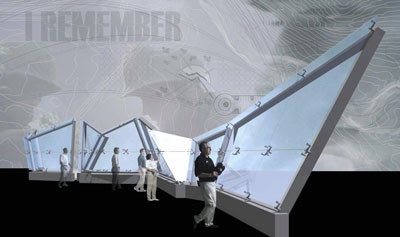 Time and again America has called on Colorado's sons and daughters to defend the world's freedom. Thousands who answered the call never returned.
- DO YOU KNOW WHO THEY WERE?
Over 6,000 Colorado veterans left their homes, and our communities to make the world a better place.

- HOW WILL YOU HONOR THEIR SACRIFICE?
The Colorado Freedom Memorial gives us all a place to pay respects to the memory of those that did not return. The Memorial will be constructed of glass that will reflect Colorado's mountains and blue skies. 14-feet tall and 125-feet long, the glass panels will be etched with the names of the over 6000 who have paid the ultimate price for our freedom. Privates, Generals, MIAs, Civilians, all wars and all branches of service, honored in one place. There is NO memorial in America like it.
Contact:
Colorado Freedom Memorial Foundation
P.O. Box 472333
Aurora, CO 80047-2333
Phone: 303-248-3990
Rick Crandall - email: rc1430@comcast.net
Posted by Sven at 1:37 PM 2 comments: