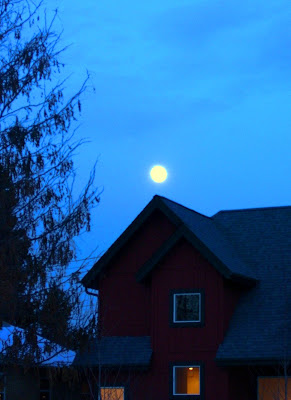 Winter Arrives, a Full Blue Moon
A new year, a new decade has been born. Janus, the two faced Roman God has taken his place in the calendar. Janus, more like the bright and Mercurial Gemini twins than the stolid, Satrunalian Capricorn is one of those astrological oddities.

The New Year arrived with an astronomical phenomenon, the second full moon within a monthly cycle. It is a Blue Moon. And this Blue Moon is nestled into its astrological home, the sign of Cancer.

Winter has arrived, cold and sharp. Looks to be a tough one. There has been snow on the ground in the shadows since mid-October.

Brings to mind a poem I wrote some 15 years ago:

One Coyote on Ice

January aires whip southward.
Bundled tight to muffle
Against a Canada born wind
My steps whip along a frozen path.

One furtive glance at me,
One flick of a bushy tail,
He rests alone, sure of life,
One coyote on ice.
Posted by Sven at 4:23 PM 3 comments: 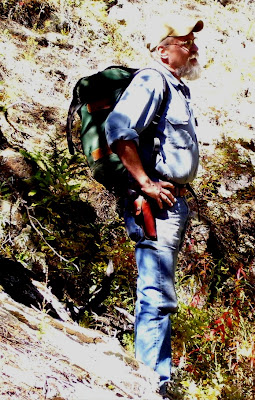 ~~ Sixth Sense ~~
Back in the dark ages.... when we were young and dumb, sometimes stoned, we roamed the lower mountains in noisome and bothersome packs. The old mines around Idaho Springs or Georgetown and those above Central City, along with the ancient cemetery beckoned us. All of us were skiers. Hiking and running down hill, rock hopping and making quick cuts between trees were one way we kept in shape during the off season.

One June while camped on the edge of an Aspen grove near Brainard Lake, that now familiar "sixth sense" woke me in the eerie alpenglow just before true dawn. My friends were still asleep, racked out mounds of colorful nylon, unconscious. Peering, bleary eyed over the frosty edge of my bag, I watched as a cottontail fairly flew around the corner, and blasted down the trail, zig-zagging in a ragged dance of deception. Two breaths behind him, a large coyote streaked into our camp, running low and intent. The moment the critter caught our scent, it froze. A burning yellow eye caught mine. A low growl rumbled, pissed. We, the intruders, had foiled a breakfast hunt. In less than a heart-beat, he(or she) turned tail and disappeared back up the trail.

Just a song dog, yet I had never before felt quite as vulnerable. I lay there shaking...unable to think or move, frozen in time. I caught a glimpse of what it meant to “be” prey. It was one of those seminal, teachable moments, serendipitous some might say. The experience was filed away in a growing inner library that ultimately led to a tipping point. I changed. I grew from being an undisciplined, loopy thinking liberal college kid into an adult, a hunter, gun owner and conservative in thought and action.

These days I ply the high mountain creeks with a light fly rod, seeking cutthroat and brook trout. Much of the time I am alone or with one friend. The reassuring weight of either the S&W .357 or the Ruger hogleg .44 mag. rest at the ready on my hip. Mountain lions and black bear prowl the environs where I prefer to fish. There are apocryphal tales, unproven, of wolves who have migrated down the Rockies spine from Yellowstone and the Tetons.

The act of being armed is purposed, intentional. It changes my placement in the environment from being possible prey into an equal to those with tooth and claw, speed and stealth. The weight, the presence of the firearm creates a change in my attitude and approach in how I interact with the environment.

Before, a blithely unconscious two legged simian, thin skinned and devoid of defensive (or offensive) protection, I wandered the trails, canyons and creek beds with an invisible sign on my back. “Eat me!”, the sign blinked. Now, with the firearm’s weight as a reminder, I remain aware that there is only that deadly tool and my reasoning mind that changes me from helpless prey into a defender. I am no longer prey. I am become predator.

Would it be that four legged predators were the only critters of concern.

Given the continued influx of people into the high country, some with questionable motives and some with downright evil intent, the open carry of a sidearm provides me, an aging, arthritic man, with a self-defense mechanism, an equalizer. You see, beloved, dialing 911 five miles from nowhere is not a viable option.

(a tip of the hat to Brigid over at: http://mausersandmuffins.blogspot.com/ for the inspiration.)