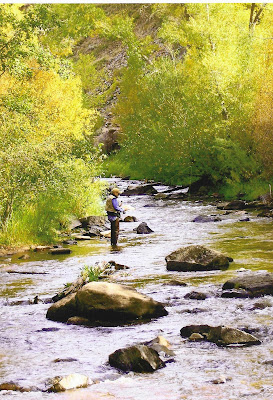 Bear Creek between Evergreen and Morrison, 26 September 2006.
That little figure is yours truly.

There is this well worn two word phrase, seemingly politically correct and held out as conventional wisdom by the bulk of modern fly fishing writers. It conjures up ancient images of Grandfather in canvas waders, a battered fedora hat stuck on his head, decked in a worn flannel shirt with a pipe full of smoldering Union Leader tobacco settled against his unshaven jaw. The images were made complete as the camera pulled back and slowly panned the scene. Grandfather stood knee deep in a rushing, crystal clear stream. His horn hard and masterful hands worked a bamboo fly rod, forming long arcs of shining line in the raking sun while the latest hatch of mayflies created a luminous insect blizzard all around him. Idyllic, yes, and the writers would say, “almost Homeric, a true Field and Stream epic…ah, those were the days.” Then, with a sigh and an inward turn of their own eyes, they would begin to remember their own home water.

Now, don’t assume that I am going on the offensive, attacking the phrase with some kind of acerbic wit. I find it a good phrase and true in subjective concept and objective meaning. It holds a deep truth. Any fly fishing junkie who is worthy of their stained and tattered vest has a place that he or she considers “Home Water.” Whether it’s a New England spring creek haunted by Brook trout or steep and rolling pocket water on some western river in Oregon, or perhaps one of the treacherous, meandering oxbow legends up in Montana, it matters little. It might be a narrow little Appalachian creek overgrown with willow and alder, or a hidden brook in Michigan’s Upper Peninsula. What matters, what defines home water is the relationship between fisherman and that particular stretch of water. It is history, a sense of place and that certain and comfortable knowing of what will be around the next turn, whether that turn be a physical bend in the river or the turn of daylight to dusk or the turn of the seasons.

Those of you, oh beloved, who know my writing, might assume that my own home water would be Cabin Creek, flowing down from the snow fields on Mt, Meeker. Divining just what Cabin Creek is in my own physiognomy; well, that’s a mighty tough read. I’m scratching my head here and wondering, thinking on the run. What does physiognomy mean and how does it relate to this essay? Here’s what the folks at Webster have to say:

Cabin Creek (another story) was and is a spiritual gift. God gave it to me as a place of harmony, reflection and life affirmation. Walking its sub-alpine banks, drinking its waters, eating its fish and the fruits nourished by its flow shaped my youth and the direction of my life, my physiognomy, if you will. I know that might seem like a bit of a stretch in science and logic. Yet that creek is as much a part of my being as is the DNA that I received from my biological parents or the eggs, tomatoes, potatoes and onions I had for breakfast.

I am not a large physical being, nor is Cabin Creek. And like that little creek, I do not like crowds or loud and boisterous convocations. My being and its being are inexorably tied to the ebb and flow of the seasons, droughts and fecund years. Mankind’s impact, beneficial or detrimental, has effected us both, yet we both continue to flow and laugh, continually fed by the alpine air, the alpine snows. Comparisons abound, and I could continue till you and I both fell asleep from my droning on.

Ya’ know, that conjures up an image. Time now for a small tangential hike on Cabin Creek.

Are you ready? Make sure you have on sturdy boots and take along some insect repellant. Oh yes, don’t forget to stuff a flannel shirt and a rain jacket in your pack. It is, after all, late summer in the high country. The weather can change in a heartbeat. Walk upstream with me, deep in the canyon we struggle through a maze of willows past an imposing granite overhang. Breaking free of the willows, we enter a small, hidden meadow about halfway between Highway 7 and the bridge on Big Owl Road. Steep slopes rise on either side of this meadow and the upstream and downstream ends are both closed by thick willow breaks. It is an intimate place, hushed, private and very personal. The waters of Cabin Creek flow out of the willows, down from a small falls into a short and deep meander before splitting into two flows around a granite outcrop. In late summer or early autumn, the sense of utter peace seeps up out of the damp earth, almost sentient and very tangible. There is this droning on the edge of consciousness that exists here. It whispers of rest and home. The breeze in the Ponderosa high above, the tinkling of the water flowing over rocks and the hushed murmur of air in the deep grasses and willows all join in a concert of contentment. Yep, a great place to sleep the afternoon away, except for the ubiquitous mosquitoes and the ominous gray thunderheads building over 13'900 ft. Mt. Meeker.

Enough, I am certain that you have grasped the concept. And now it is time to tell you of my home water.

Bear Creek rises from three snow fed alpine lakes on Mt. Evans, south and west of Denver. This center most massif of the Front Range peaks is visible from the plains. The Evans massif boasts two peaks over fourteen thousand feet. Mt. Bierstadt (14,060 ft.), is tied to Mt. Evans (14, 464 ft.) by an uncompromising and wicked saw tooth ridge that runs roughly east by north east in a south facing horseshoe shape. It is here that Bear Creek begins it run to the plains from the eastern slopes of the massif.

The creek rolls east by north east out of the rugged Alpine and Sub-alpine Evans Wilderness area into the Montane region designated as a state wildlife area where hunting and fishing are allowed under strict management by the Colorado Division of Wildlife. Jefferson County Public Schools maintains and outdoor education lab here. Now the creek drops into a broad and long glacial valley. This is the very private, very expensive, hobby ranch community of Upper Bear Creek. Willie Nelson once owned property here, until the taxman caught up with him. At the lower end the valley narrows into a short canyon then opens out to Evergreen Golf Course and the man-made Evergreen Lake, one of two impoundments created as flood control and municipal water supply diversions. Below the dam, Bear Creek flows through the township of Evergreen, (called by long time natives with a bent towards irony as “Overgrown”) where its banks and flows are maintained by the local chapter of Trout Unlimited. At the downstream end of Evergreen, the growing creek flows through a camp owned by the Episcopal Church. It then enters a checkerboard of private and public land. Midway down the canyon it passes through a private compound of one of the richest families in the Rocky Mountain Empire.

The twisting snake known as Highway 74 follows the winding canyon cut the creek from Evergreen down into the touristy town of Morrison at the mouth of the canyon. Leaving the foothills behind, the creek enters the Southern Denver suburbs. Here, the second impoundment forms Bear Creek Lake, a state park maintained for all types of water recreation. The creek then flows east until it merges with the South Platte River.

There you have the basic geographic structure of Bear Creek. Why do I choose to call it my home water? I could have easily picked much more glamorous and legendary rivers or streams like the South Platte around Cheesman Canyon, the steep and technical St. Vrain, the wicked Big Thompson, or even the northern beauty of the Cache la Poudre. Nope, I like the egalitarian, workingman nature of Bear Creek. It serves all conditions of mankind with the same implacable goodness and boundless energy. Members of Denver’s high society have maintained summer homes on its banks since the late nineteenth century. Mayor Speer, Denver’s farsighted leader in the early 1920s, purchased blocks of land along the creek and turned them into parks that are still maintained for any and all city residents to use and enjoy. Despite the immense impact of man on the majority of its length, Bear Creek retains a wild and clean feel. There is seldom found such intense human pressure with such little pollution. It is a grand combination and sympathetic interaction between man and nature. This long term and intensive use by humans shows that, with a bit of sensitivity and responsible cooperation, man can do what the Creator called us to do, maintain and husband the gift of this, our planet home. Plus, I can be streamside within forty-five minutes of leaving my front door. Not a bad thing at all, given my affinity for solitude of any kind.

On top of it all, the fishing is good and somewhat predictable. The canyon between Evergreen and Morrison holds mostly rainbows and brown trout. They are normally seven to fourteen inches in length and feed on a broad selection of insect life, most of it sub-aquatic. Therefore, Bear Creek is a nymph fisherman’s heaven. Hooking up with a fifteen to seventeen inch rainbow has on rare occasions, surprised my fishing buddies and me. Most folks who do not know Bear Creek look at us with doubt in their eyes and the attitude that, like most fishermen, we are prone to exaggeration, particularly when plied with strong drink. The fishing pressure keeps the resident fish educated enough to make we anglers work on our presentations. Bear Creek doesn’t have any legendary hatches. Although, in a good summer, there can be a wave of caddis fly hatches that travels upstream around the Fourth of July.

I suppose, if I had to pare down to a single word, why I have chosen Bear Creek as my home water, that word would be comfortable. Like a well-broken in pair of Carhartt overalls, Bear Creek fits me well and does the job intended with strength and grace, year after year after year.It’s a good symbiosis, full of synergy. And I believe that we both enjoy this relationship. I can’t speak for the creek, yet if my feelings are mirrored at all in the laughing waters of Bear Creek, then yes, it is a good relationship between Bear Creek and this old grandfather.