Over at "Irish Elk" (http://mcns.blogspot.com/) where the conservative Roman Catholic side of New England is well represented, one of the posts led to a recipe for an late Summer/early Autumn dessert "Apple Slump" which helped fuel my own cooking/canning...and yes, hunting frenzy, here in the High Plains.


First, our Pronghorn Antelope hunt had to be cancelled. My twenty-five year hunting/fishing partner lost his father to lung cancer. We buried him on opening day of antelope season. May God richly bless his soul and reward his spirit for his lively faith here on Earth.

Outside of the overwhelming and continuous barrage of Gatling gun political ads on the radio and TV, computer generated phone calls and yard signs proclaiming someone or something, we have been blessed with a magnificent Autumn. Two weeks ago we were privy to an early Canadian cold front which hammered our tomatoes and cukes and all tender garden plants. That, in turn, led me to open up a tome by one of my favorite writers and Colorado native; Gene Amole.

Gene loved this wild land. For twenty years he wrote a bi-weekely column about it, shared old recipes, recalled lost memories from frontier days...and personally held court at the only 24 hour classical music station between Chicago and the West Coast. His recipe for Green Tomato Relish/Piccallilly/Chow-Chow is a classic. Ms. D and I canned 16 quarts.


That left five large pumpkins, to be processed. One became a Jack-O-Lantern, one was donated to the squirrels and here is a pic of the three remaining "calabasas": 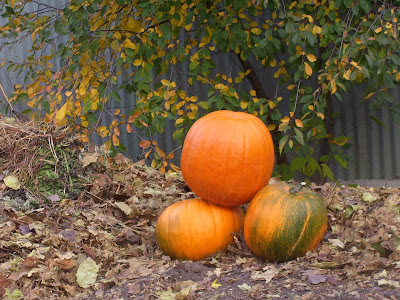 I told Mrs. Peperium that I would share my favorite Pumpkin Soup Recipes, and I will.

But first, a couple of photos from our stroll along Clear Creek today. It is true Indian Summer, the last warm days before the Canadian and Pacific cold fronts begin their barrage of the Rocky Mountains and the High Plains. As always, the pics are clickable and will open to a larger format. 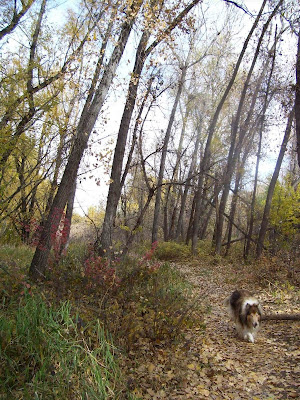 Looking downstream, towards the South Platte 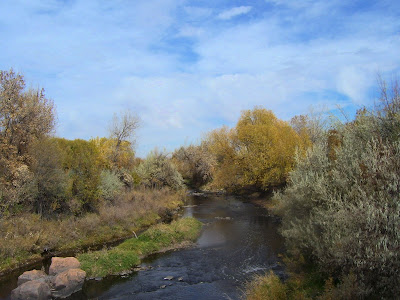 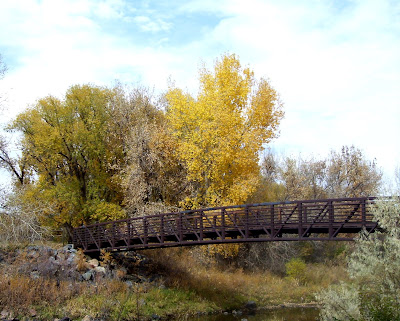 Now, on with the recipes:

Sort the beans for rocks and inedibles. Soak in cold water overnight. Drain and place in a large saucepan or dutch oven. Add the hamhock, epazote, and cover with water. Bring to a boil and simmer till the beans are tender, about 45 minutes.

In a medium skillet, heat the oil over moderate heat. Add the onions and garlic and saute until soft. Do not let the garlic brown.

Add the onion/garlic mix to the cooked beans. Add in the pumpkin, chard, chiles, oregano, and a half-teaspoon of salt. Simmer over low heat until the pumpkin is tender, about 20 minutes. (It takes a full half hour here in Denver's altitude.) Remove the hamhock, shred any available meat and return it to the soup, salt and pepper to taste.

Espanola Pumpkin Soup
_____________________
Here's a pumpkin soup that ya'll are gonna love...and it's a much better use of pumpkin than that sweet marshmellow thing that we so often do for the holidays.

- 1 onion, quartered
- 3-4 cloves garlic, minced
- 2 or three potatoes, peeled and cut into chunks an equal amount of peeled and seeded pumkin meat
- 4-6 cups chicken stock (I like the low sodium)
- 1 Scotch bonnet chile - (use an habanero or chipoltle if there are tender palettes.)
- 1 bay leaf, broken
- other spices that you like - I like allspice and salt and freshly ground pepper.

Transfer the mixture, in batches, to a food processor and puree till smooth. Return the mixture to the pot, reheat and adjust seasonings - I added a splash of cognac. Be forewarned that if you actually do use a scotch bonnet or habanero chile, this is a pretty spicy soup, even if you discard the chile. You might experiment by removing the chile earlier in the process; but mine was delicious! Enjoy!

BTW, this one is traditionally served in a hollowed out pumpkin carcass, warmed with hot water and blue corn flour tortillas.

2)- Gene Amole's favorite columns from the Rocky Mountain News have been published in three compilations, MORNING, AMOLE AGAIN and AMOLE, ONE MORE TIME. There are copies available at Amazon:
http://www.amazon.com/gp/product/0914807005/ref=olp_product_details?ie=UTF8&me=&seller

Gene also penned a book about the last days of his life and the prospect of imminent death:
THE LAST CHAPTER: GENE AMOLE ON DYING. He and Thomas Hornsby Ferril were good friends. Ferril was Colorado's Poet Laureate from the mid-1970's until his death in the late '80's