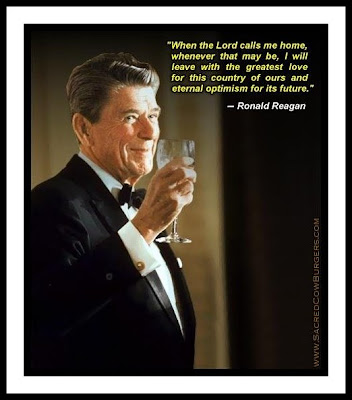 
"Any day you wake up on the right side of dirt, is a good day! It’s another opportunity to do something… to be free and be in the fight. It’s another day to influence someone, to teach, to lighten the load of another and to try and give back part of what I’ve gotten from living in the greatest nation on Earth. It’s a gift from God that I hope I don’t waste."

Fight ‘em till Hell freezes over, and then fight ‘em on the ice!!


- Thanks to Trooper John Smith over at ://www.sondrak.com/index.php/P35/
It would be easy to reach out and take hold of the remote control and slip into a drooling, semi-sonambulent state, dumbed and numbed by post-modern, negative seeking, and decadent media.
There is some truth in the Wachowski Brother's film odessey, The Matrix. We are surrounded by Addictions and those who seek to placate us, remove us from the fight, keep us powerless and addicted.
Ronald Reagan chose to walk a separate path. He believed the following:

- There is EVIL in the world and we are called to name it, defy it and defend against its influence.

- There are those who are pluralists, grey in heart and spirit, servants of Communism and/or Social Fascism. They do not believe in a higher power, God, other than self or the collective state.

- It is our job, in this great land, to stand against the evil, fight against the godless and take personal responsibility for making this world a better place, by the gifts and grace of God.

I think it a good time to consciously take time to stand against the onslaught. Turn off the talking heads and their endless stream of their poisonous, soul killing drivel. Take a day to fish with an old friend or some lost member of your family. Split some firewood. Talk to your neighbor, help him or her fix a broken stairway, roof, walkway. Look your mate in the eye, take a breath and tell him or her that you love them...and say it with conviction. Dig up a forgotten corner of garden somewhere and plant a future. Read a book. Take ten minutes and be quiet, reflective, prayerful.

Take time to join in worship with those who believe as you. Join them this week at your temple, synagogue, church, chapel, some chosen place of praise.

Thank that being, however you choose to see that higher power, for the gift of life and citizenship in this great and powerful land, blessed by God. And thank that same God for the gift of Ronald Reagan, President and Statesman.