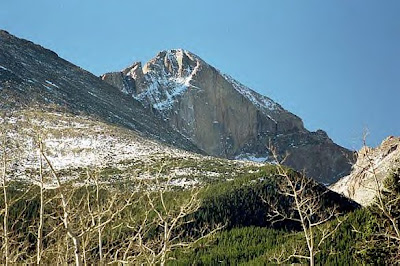 " It is a rising tide of dazzling light.

It is heady: our skulls fill like cups of fire."

Whew! (a hat tip to Amy over at: http://amykane.typepad.com/blog/)

Here, its more the altitude than the latitude. Spring is defined by one's proximity to that long and sinuous, granite and quartz dragon spine that splits the continent in two. Come May, it still glitters with winter bright snow. At nearly two and three quarter miles high, some of these solitary peaks know only two seasons, winter and August.

Some unremembered, unrepentent grizzled old prospector coined the phrase a century past. And it still rings true.

I can see him standing proud, bent and twisted as the sub-alpine bristlecone pine, shaped by the brutal wind, the brittle brilliant sun and the incomprehensible weight of stone on stone on stone...The Rocky Mountains. Fresh from the assayer's office, he leans on the Silver Queen's mahogany bar. His reflection wavers in the silver dust mirror. Dark whiskey grasped in one gnarled hand, a half finished lager, golden sea foam in the other, he pulls long and slow on a fine treat, a ten cent cigar. It's blue-gray aura encircles his wicked, unkempt visage, a spicy halo.

He is Saint Mud-mucker. His parish ranges across the long, alpine creeks above Leadville. Baby Doe Tabor is his blue-eyed Virgin, The Silver Queen saloon, his cathedral.

Mud defines him; its grayness permeates clothing, skin and soul. His once bright red union suit is tattered and muted, oiled with cold sweat and dynamite dust. Crusted mud encases his boots, seeps into his deepest thoughts. Only his eyes, they sparkle with that fire, that lust for gold. THAT is the fire burning deep in his fevered skull.